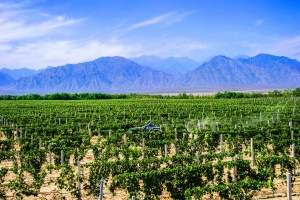 China’s top winemaking region, Ningxia, has seen exports jump by over 46% in the past year despite the downward trend in international trade.

Wine producers from the region in the north of the country claim that the products are also dominating in the domestic market, and outstripping the competition posed by imported wines from the likes of Australia.

This is according to Ningxia government offical Zhao Yongquing, speaking recently at the First China Internatiional Wine Culture and Tourism Expo.    With the relationship between Beijing and Canberra becoming ever frostier, and the imposition of hefty tariffs on Australian wine imports, Australia has lost its dominance in the Asian market. Chateau Changyu Moser,  China’s oldest winery, currently exports to over 40 countries and regions. “The current market share of Australian wine in China has shrunk to a relatively small scale,” a staff member told Global Times.

Ningxia wines are now selling well in markets including Europe, America and Japan with an increasing number of local wine export companies muscling into the business to expand exports further.

Ningxia accounts for a quarter of total national production, with over 366 sq km of vineyards, with 211 winemakers producing 130 milllion bottles of wine each year, according to Zhao.